It is said that on the rare clear days at Stormsedge Cliff, a mysterious tower can be seen, about a day’s travel out in the Stormwood. On clear nights, the glow of lights can be seen, and sometimes flashes of what looks like lightning.

The lot of you are on your way up to Stormsedge Cliff from Elphindale. You had a run-in with the Crimson Fists last night. Gave as good as you got, but it’s going to be a while before you can show your faces back in Elphindale. Not run out of town exactly, but not-not, if you catch my drift.

You’ve heard there’s an inn at Stormsedge, the Stone Dragon. You’ve heard that there’s also a way down into the Stormwood from there. Untracked woods, ancient ruins, dead gods, fallen empires, and masses of loot and experience. What more could a newly-homeless bunch of chancers ask for?

Spoilers: There is a Tower. Also a Sochet.

What: The Tower of Sochet is a D&D 5E dungeon/tower crawl for 3-5 Level 1 Adventurers
When: January 26, 3PM-7PM
What you need: Level 1 Character (all official WOTC publications permitted) of your own creation or select a pregen from a list of options I will supply
Newbie Friendly however rules will not be gone over in detail before start.

Reply to this post if you would like to investigate the mysterious tower! Feel free to DM @nerfherder if you have any questions

Interested in this game. Please guide with next steps

Hi there. Interested to join this game and investigate the mysterious tower!

Hello both! Good to have you on board.

What’s your respective familiarity with D&D? Will you be bringing your own characters or would you like to choose a pregenerated one?

Hi, two of us are interested to join this campaign. Please help with pregen options. Thanks.

Hello and welcome to the both of you! Who is the second person please so I can update the post? Also what is your familiarity with D&D?

Choose from the pregen options below please. 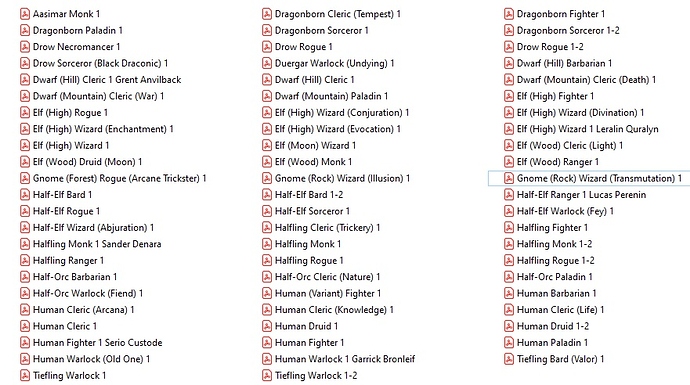 Hi. @aravind_sivakumar is the other player. We have played D&D once before. Would like to choose pregenerated characters

Awesome! You’re both confirmed. Please choose pregens from the list above and let me know.

Dragonborn Scorceror for me and Elf (High) Wizard (Evocation) for @aravind_sivakumar

Done and done. I’ll send you guys pics of mini options later in the day for you to choose from.

@pavithra2304 here are your mini choices. Unfortunately I have very few dragonborn minis

Here are the choices for @aravind_sivakumar

Welcome @Playitw311 . You are confirmed as well. What is your familiarity with D&D? Will you be bringing your own Level 1 Character or would you like to choose from the list of pregens I circulated a little higher up?

Hi Sid. I’m ok going with a preconstructed character. What are the options remaining? I do have a beginner’s understanding of D&D

These are your options.

@pavithra2304 and @aravind_sivakumar have both chosen spellcasters, so could I suggest that you choose some type of frontline fighter?