This adventure series takes you to the Udeizo Riverlands, north of Loorou. Cradle of an ancient Naga civilization, craved by Elves and humans alike for the plausible plantations of medicinal herbs that are unique to the region.
But after the Naga civilization fell, the land south of Snailnose has been occupied by various Goblin tribes who have raided and destroyed plantations to the north of the river.
After the elven city of Liadon was raided and razed, the Elves sought help from the Human kingdoms of North.
And now we are in the middle of a perpetual invasion that’s going nowhere.
The coveted ruins of Udeizo remains out of reach as the rumours of an defected Elven Druid who leads a band of goblins emerge. An Elf whose bloodlust can only be matched by Goblin carnage.
Yet the news is the goblins under them are trained in elven warrior arts and are forever elusive.

For moderately familiar players, but new players are most welcome. Mature themes including good-faith exploration of fantasy racism, slavery, war and politics. So, please be forewarned. 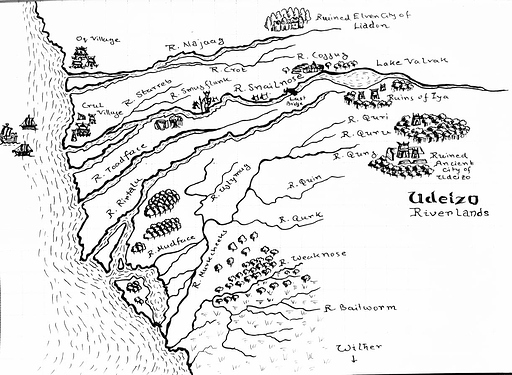 Drop a reply below if you want to participate in this adventure!

Awesome, adding you to PCs. Kindly join my room in Loorou Discord.